Because of their diversity they are available in many differing forms, are of varying complexity and of course come in a range of sizes. Small, remotely controlled devices are accessible to everyone and can now even be purchased from the local toy shop. They have the potential to be used for simple reconnaissance missions, possibly for recreational use. 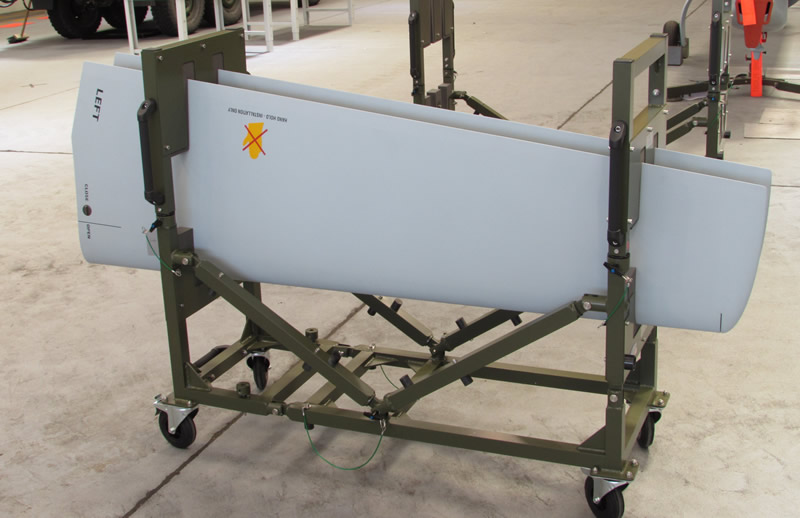 There is, however, obviously a more serious role for unmanned aerial vehicles (UAVs), in particular those used for military applications; some, such as the Watch- keeper used by the UK Armed Forces, are comparatively complex and therefore more substantial, robust systems. This particular vehicle has a considerable payload and a fairly large wingspan of approximately 11 metres.

Transportable in a semi-disassembled state to its “point of use” in protective containers, Watchkeeper has been designed to be quickly reassembled to enable rapid deployment. The wing detaches in three sections, and the V tails are individual components, as are many of the access covers. These are all made of composite materials and although the aforementioned wing sections are light, they are fairly sizeable, which presents its own challenge once removed from the fuselage for maintenance or temporary storage. These are valuable items and therefore have generally remained attached to the fuselage to minimise the risk of damage through handling.

DRALLIM Industries Ltd, a mid-sized company on the south coast, has been a source of defence equipment for over five decades now, and are a known supplier of ground support equipment to commercial airline operators and their maintenance teams. They were given the opportunity to provide a solution to design a storage system for the removed Watchkeeper components during maintenance operations. On the basis of their novel approach, they were selected to come up with a group of easily manoeuvrable stands.

Provided initially with just sketches and overall dimensions of the sub-assemblies to be accommodated, once their proposals were accepted, they were given access to the vehicles to check dimensions prior to manufacture.

DRALLIM designed a system of 3 foldable welded aluminium stands, manufactured prototypes and trialled these onsite to ensure their suitability before making a production quantity. They were able to provide a system that not only met all of the necessary requirements but also included added features such as a working platform on which to rest the main wing sections during maintenance, allowing access to both upper and lower surfaces. One stand houses the 3 wing sections, a second the two V-tails, and a third, the various covers within individual protective “bags”. The wing stands are shown in the photographs, alongside the Watchkeeper itself.

The users have found the DRALLIM solution to be of such benefit that the wings are now removed and kept in their stands alongside the UAVS on a permanent basis, in preference to them being fitted to the fuselage. This greatly reduces the storage footprint, enabling greater space efficiency within the hangars.

A similar solution can be provided by DRALLIM to suit any other UAV, who are indeed able to offer assistance with any other bespoke storage and handling requirements.

Drallim to exhibit Lashing and Restraints at Helitech Expo 2022 Stand No. D84

This summer, join us at Farnborough International Exhibition & Conference Centre to find out more about our range of high quality Door Barrier (Safety Nets)……