It all started on a cold wet October day, I was sitting indoors watching some mind-numbing program on TV and thinking that this is going to be a very long winter if I don`t have something to look forward to. Sitting there and scrolling through the usual posts on social media when on a friend, that is a career, timeline pops up “Skydive One Giant Leap” for the alzheimers Charirty. I mention this to Helen my partner, who is also a senior career, and she says go for it if you think you can do it (she knows that I am terrified of heights and scared even up a ladder!!! But I feel this is  such a good cause and I know so . So, this starts my mind going and within a few days I tell her I`m going to do it and book it.  I`ll need to raise over £430 to have the Skydive covered by charity, at this point I`m thinking that I hate asking people for money and I`ve never raised an amount that large before. My Jump is on the 27th May 2018 so I concentrate on raising money and break the £430 with the majority collected though my place of work, Drallim Industries, and raise a total od £767 on the day.

The day of the jump

I have to be at the Aerodrome in Headcorn, Kent by 8:30am to register. Headcorn is only a 26mile drive but it`s through the picturesque Sussex and Kent countryside so takes around an hour to get there. We wake up at 6am, Helen, Helens mum (Nana), My sister (Penny), my son Zane and Myself, and take the drive up to Headcorn. I`m not feeling too nervous at the moment but the part of hanging over the edge of the plane (because the instructor that you are attached to needs to sit on the edge of the plane before you jump) is worrying me a bit. I drive there with Helen as my back up driver for the journey home and she chooses the music although Lana Del Rey “Born to Die” was an ironic choice. We arrive around 8.10am and meet my Mum and Dad there, after a quick registration and payment for the Skydive to be videoed I await to be called with our group for the training. Our own Michael Palin lookalike for the Briefing informs us an all manoeuvres and safety aspects with a couple of jokes slotted in to make us feel at ease. Once we have completed this we await the updates on the screen to tell us if we`re up next or not. The weather is perfect and hoy 28°C so we sit outside and watch others go and climb so high in the plane that you can no longer see it with the naked eye but you see the Parachutes deploy and everyone lands safely. I wait until 12:30pm When my name is called up and enter the building to get suited up ready, everything is double checked with my instructor Janos and I`m introduced to Alec who will be filming he event. I have to show that I can perform the poses for leaving the plan, Freefall and Landing we are told once the `Chute is opened we can relax, this is done suspended from the beams of the building (so we probably look a bit silly) then after a being filmed quickly by alec and a couple of photos we`re on our way to the minibus to take us to the plane. 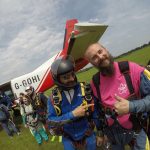 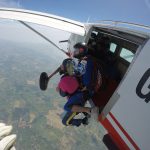 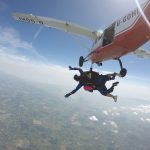 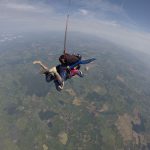 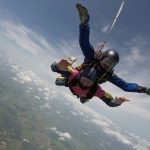 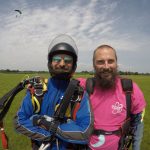 Once at the plane we all pile out of the minibus and stand by the side of the plane for a photo opportunity, then we enter the plane and get seated. A couple of people go in before then Janos then me, we all sit on the floor facing toward the tail of the plane and I shuffle up between Janos` legs (it`s very cosy) and he hooks me up to his harness. Alec sits between my legs and the plane fills up, there`s about 12 of us onboard and we`re off taxiing down the grass runway. Then we`re airborne climbing and climbing, Janos explains we`ll stop climbing at 5000ft for a few to jump then we`ll climb to 12,000ft. I look at the world getting smaller and smaller when we level out and the first people jump, then we climb again which feels like an eternity higher and higher. The airfield is just a tiny green patch when we eventually level out again, the door opens and the next lot go, Camera man first hanging out the plane and the Tandem sitting at the door edge, then they`re gone. Our turn next, Alec hangs on to a bar at the door filming as I bum shuffle to the door as I get close enough I put one leg out and think “My trainers are going t blow off!!” Janos places me just outside the plane, this is the part I was worried about but I felt relaxed and just made sure I was in the correct position with my legs as far back as they would go and back as far too (a bit like doing a bridge on a mat) then one ,two , three and my stomach goes all light (like a humpbacked bridge but doesn`t come back down) I scream something but I can`t remember what. Suddenly there`s a tap on my shoulder and I take up the freefall position, pretty much a starfish pose with knees bent behind, and we level out parallel to the ground, the view is amazing and so clear. All I can hear is the wind rushing past as Alec floats around from my left, he`s that close I could shake his hand, I feel strangely calm and Alec disappears around my right and out of my view at this point I`m thinking that Janos will deploy the parachute (even though the ground still looks like google maps at 500M zoom) Alec reappears to my left and gives me a smile. It feels like we`ve been freefalling for ages when I hear Janos tell me his going to pull the `chute, smoothly we stop falling and feel like we`re being pulled up by some force, It`s not as bad as I was expecting, and I`m told to remove my googles and clear my sinuses, I hold my nose shut and blow my ears pop and everything is quiet. I can hear the quiet flapping of the parachute as we`re gliding along, Janos asks me if I want to take control and I say “yes” he passes me the secondary controls and give a brief instruction. In out training we were told if you pull on one control hard to your chest the `chute will go in to a falling spin (a bit like a roller coaster but with lots of G force) so I try this, there`s a slight pause as we gently turn and then we spiral I can really feel the power of the Parachute and it makes me feel a bit light headed. I do this a couple of times and Janos says if I`m happy pull one cord then swap directions so we do a figure of eight. I do this and its amazing although I decide to stop doing it when I get pins and needles in my feet!! Shortly after Janos takes back the controls so we can position for landing, he does a couple of spins to loose altitude and to line us up with the landing circle, he tells me to adopt the landing position which is legs up in front with toes pointing up as high as I can and we glide down as I slide onto the grass on my bottom in the sitting position. Janos unclips me and tells me to stand up as Alec comes over for the last bit of filming, at this point I am really buzzing with adrenaline and don`t really know what I`m saying but I seem to string a couple of words together. I help Janos pack his parachute away by holding a bag and we make our way back to the minibus. It was an amazing experience and I would definitely do it again if I had the chance.

You can find his sponsor page here .

Come and visit our stand to find out more about our range of high integrity aircraft deck lashings and restraints! The lashing range has been expanding……

Drallim Industries Limited will be exhibiting at CHEMUKEXPO 2022! We look forward to seeing you this May 11th & 12th – NEC, Birmingham! We will……

Drallim will attend two exhibitions, Scottish and Wales exhibitions in December 2021.    Stand #A47 at the 2021 Scottish ‘Meet the Buyer’ Nuclear Supply Chain……