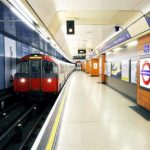 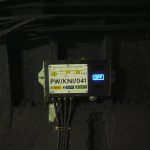 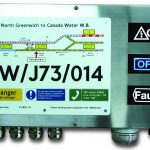 Every night workers maintain and upgrade the London Underground and their protection is paramount. Work cannot start before passenger trains are taken out of service and the track current is turned off. Only then can certificated Protection Masters trained to use a handheld device access the track to test that the 630V DC traction current is actually off.
Tube Lines developed a prototype permanent trackside device (P-CRID) to protect engineers from live currents when they are working on the Underground.

The P-CRID means the Protection Master no longer steps on to the track to check traction current. Track teams can view the device from a place of safety until it shows that the current is off. As renewal and maintenance works continue through the early hours the device shows a continuous indicator on current status. The P-CRID has back-lit visual panels and emits audio beeps to show status.

With a prototype built and successful field trials completed Tube Lines required a contract manufacturer to optimize the design and manufacture 600 units. With a short lead time and installation schedule they went to tender.
Drallim Industries were the successful company. With only a prototype and minimal drawings their engineering team went into action. An engineer from Tube Lines was based in-house at Drallim’s manufacturing facility in East Sussex to approve the design and sign off drawings as they were produced so components could be purchased as soon as possible.

Software changes and PCB layout modifications were carried out by Drallim engineers to meet the latest operation and EMC requirements. The final certification required before manufacturing could commence was to ensure the enclosure met the required environmental rating. Again Drallim’s engineers performed the IP testing in-house and with all the documents signed and approved by Tubelines the manufacturing process could commence.

Drallim created a dedicated production line for the assembly of the P-CRID’s. Purpose built manufacturing jigs; tooling and test equipment were also designed and built with an interlocked test area created for the high voltage testing of the completed assemblies.
With just a four-hour work window between last and first trains on the London Underground, the innovation has seen a much improved balance of efficiency and safety. The P-CRID has been described as one of the biggest safety improvements made in the industry for decades

The P-CRID is constantly self-checking itself and is always fail safe, giving the track teams confidence about the state of track current.
So far 600 P-CRIDS have been installed across the Jubilee, Northern and Piccadilly lines and have a design life of 25 years. The team behind this groundbreaking device designed, built, assured, and commenced installation within just 12 months – a timeframe unheard of in the rail industry for such a major improvement. The company is sharing the innovation with other railways and the rest of the Underground.