The system is comprised of these hardware components:

A software utility is used to configure the control station to map the location and functions of transponders.

What is it intended to do ?

The main purpose of this tool set is to prevent unauthorised access to cable terminations, whether they are on Telecommunications sites or Railway networks, for example. In addition, the cable breaks can be located when, for example, contractors from other utilities sever underground cables by mistake, or thieves are attempting to steal copper.

Compact and robust transponder devices are attached to designated points on the cable network. The transponder devices are set to respond to cable breaks and cable network access events. Events such as the opening of a joint box lid, access to a roadside cabinet are recorded by the system and alarm messages are generated within seconds.
Alarm messages can be directly sent to operations staff who can in turn alert the local Police authority.

How does it work?

Copper pairs embedded in the monitored cable are used as a communication path between a central exchange control station and a network of transponders, devices that simply respond when addressed. 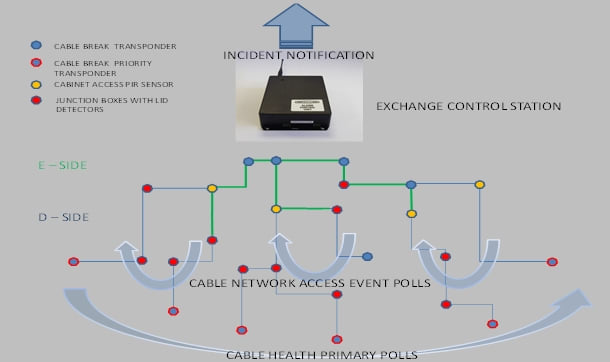 The control station polls each transponder sequentially, priority is given to transponder devices on the periphery of the network. Each poll takes less than 100ms, enabling entire networks to be scanned within seconds continuously. It is important that polling priority is given to peripheral devices, and those covering network access points, such as cabinets or junction boxes, so that the time taken to validate and report an incident is minimised.
Top